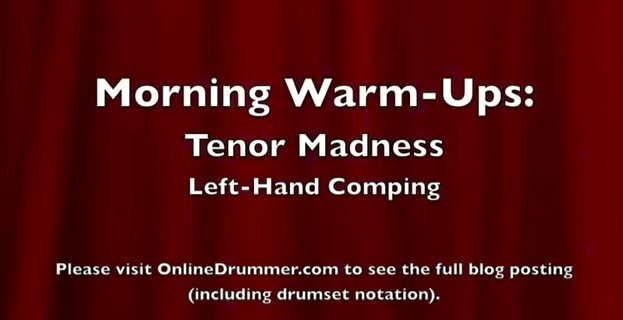 As I mentioned in my last post, I had the good fortune of going to PASIC this year. One of the highlights for me was a jazz drumming clinic done by legendary player and educator, John Riley. http://www.johnriley.org/.

Backtracking a little bit, about a decade ago–based on John Riley’s excellent jazz publications (http://www.johnriley.org/publications.xml)–I began to take yearly trips to New York City to study with John and to hear as much world class New York jazz as I could. I called it my “jazz saturation,” an attempt to take my playing to the next level. Luckily, small grants through the Arizona Commission on the Arts helped defray some of the steep costs…

I’m not sure exactly how many lessons I took with John over the years, but I found him to be an inspiring teacher, direct in his approach, but at that same time, caring, funny (a very dry sense of humor), and incredibly helpful with both the technical and the mental approach to jazz drumming/improvisation.

When I noticed he was giving a clinic on improvisation at the 2011 PASIC, I decided I would volunteer if called upon.

As I walked into the giant Indianapolis convention hall, I wasn’t too surprised to see that the almost all of the seats were taken. I noticed that there were hundreds of people standing along the sides and back wall. There must have been around 3,000 percussionists in attendance.

I didn’t have a moment’s hesitation about volunteering, so I sat in the front row. Sometime into the clinic, John asked for a volunteer. I suddenly found myself on stage, trying not to think too much about who might be in the audience (Peter Erskine, for instance).

John said something along the lines of, “Andy, why don’t you play a solo for us.” He handed me his signature Zildjian drumsticks and I sat down behind a nice set of Yamaha Club Customs and an array of Zildjian cymbals. I proceeded to play a stream of consciousness solo (I had just been to a Billy Martin clinic earlier in the day and was still processing Billy’s style of improvising).

Luckily, my amorphous solo played into the concept that John was trying to get across in his clinic: the soloist has a symbiotic relationship with the audience. If you play something that the audience can relate to or can recognize, you are going to get a better reaction (than a solo without theme or structure).

John noticed that part of my solo sounded like I was playing off the Sonny Rollins tune, Tenor Madness. Here is a 1956 recording by Sonny’s Quintet with John Coltrane and Philly Joe Jones on drums.

John then told me to improvise again, this time I was to play one chorus of Tenor Madness, improvising with my left hand only, while playing a typical jazz pattern with my other 3 limbs. I most probably played something like this.

To my best recollection, John then asked me to take more liberties, again playing off of Tenor Madness, but this time using both my left hand and right foot. Here is how I heard it today.

This becomes a extremely fun and endless pursuit. I would really get a “kick” out of it, if the readers of this blog would take a stab at this. Feel free to provide feedback/comments and/or record or videotape yourself playing a chorus of Tenor Madness, improvising in whatever way suits you. Don’t feel pressured to write out the notation (though that would be great too!).

I will be continuing the story of John Riley’s clinic in my next posting, providing even more Tenor Madness examples.

I would like to publicly thank John for another great experience.

A couple of business items:

• Thank you to Drum! Magazine for publishing a press release about The Drummer Stand on their website (Visit Release Here). The stand will be available in January. Contact Manhasset for more information.
• My new book (through TRY Publishing) Drumset for Preschoolers is due out any second now. Stay tunes for breaking news on this.
• Thank you again to those who are buying my books. I really appreciate the support!

I had the pleasure of hanging with Moose, the man behind the throne with Bullet For My Valentine. Moose shared... read more

Rock along with Andrew W.K.'s Rich Russo as he takes us on a behind the scenes look into the life... read more

Have you ever carefully learned a song for a gig, and then experienced an on-stage train wreck? Your band may... read more

How Fast? You May Be Fast Enough

Drum Tutors with a Difference

We have all had tutors in the past. However, sometimes we remember a few exceptional educators that have not just... read more

OLD Unites Across The Atlantic

OLD members Caulkie and Shokwave unite across the Atlantic for a great drumming time. OnlineDrummer.com bringing the drummer world together! read more

Perhaps the largest hurdle we face when learning a new song is that of motivation. Regardless of whether we're beginners... read more

This time, O.L.D. asks Ralph Salmins questions about drumming, and the key to breaking out professionally. read more

This time, O.L.D. talks to Karl Brazil about drumming and about how to break out professionally. read more

An invaluable look at studio drumming from the eyes of world-class producer, Rob Graves. What impresses the producer? What's taboo?... read more

Paulo Baldi, the time behind CAKE, shares his insights into the art and career of drumming. read more