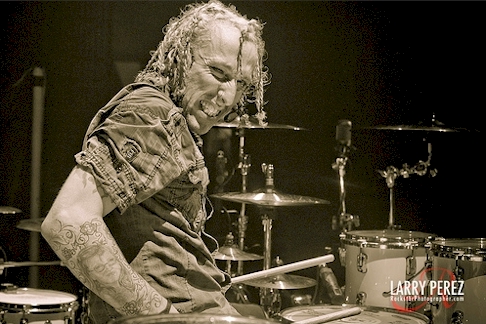 If you haven’t watched Morgan Rose at work behind his Pearl, add it to your bucket list. This same energy and personality bleeds into his drum tracks, recording aggresively melodic, rhythmic art. Breaking the mold, Sevendust strayed from the formula to create their latest record, Black Out The Sun, propelling their distinctive sound to new levels.

We had the chance to talk with Morgan about Black Out The Sun and other tips and insights he had to share.

O.L.D.  What did you do differently style-wise on the drum part for Black Out The Sun as opposed to your other records?

Morgan: I wanted to try a few new things, but I didn’t want to do anything just to do it. I never played a blast beat on a record before and thought I wouldn’t mind doing it–something that was capable–and used in a different way then a lot of the stuff I’ve heard. So, I started working on that a little bit and threw a blast beat in the record.

My drum tech is a master at putting kits together. He went in without me ever playing the kit at all, and I ended up with two octobons in place of a ten inch tom. So, all of the sudden it was like, “How can I incorporate this into the record and not play the normal 10, 12, 14, 16 setup?” It was challenging at first. It’s a pretty small target to be hit. I stared incorporating them, throwing them in now and again. It was a fun record to do.

O.L.D.  Did you practice the blast beat in order to include it in the record?

Morgan: There was no practicing. I’d never played one in my life. We wrote the record from scratch. We didn’t have any music when we went into the studio. That made it extremely fresh, a lot of winging it, and when you’re winging it you’re not over thinking it — sometimes some cool stuff comes out.

I was sitting there one day getting ready to track a different song, something we had just written, and I was playing around with a beat that incorporated a little bit of a blast into it. Clint was sitting there with a guitar, and he started playing a groove over top of it. I was like, “Wait a minute … I don’t even know what I’m doing here. I’m just kind of diddling around.” And he said, “that’s killer! We’re going with that.” So, it was kind of on the spot. We were goofing around.

O.L.D.  Winging it worked out very well for you in Black Out The Sun. Do you think this is a good approach for less experienced players?

Morgan: I wouldn’t suggest winging it. I’ve been winging it for a long time. I don’t consider myself a professional. I get a lot more attention for stage presence than I do for playing.

My whole thing with that is that you play so much, you get bored playing the same old stuff, so you start to ad-lib. I listened to some recordings of some old stuff we did, and I was like, “It’s awful.” I was overplaying every song so bad live — just because I was bored. I’ve been trying to calm it down a little bit live.

In the studio, I think it was the first time on the new record that I actually did something that was really challenging for myself. I knew it wasn’t going to be easy to play.

O.L.D.  Your stage presence is definitely a ‘Morgan Rose’ signature. How did you develop your presence on stage? Is it just something that comes naturally?

Morgan: Early on, I would actually view videos and usually say, “Oh God, that looks stupid.” But, it’s just my personality. There’s stuff I’ll see in a video that I think looks ridiculous. So dumb, but at the time I just felt like doing it. I don’t really care that much at that point. That’s my personality.

I’ve had a few people that were extremely reputable guys that said nothing’s ever stupid when you’re up there, because it’s real and that’s the way you feel. It’s great.

I see a lot of drummers that go up there and try to incorporate a live visual thing, and it doesn’t look good. It looks really contrived. It makes it like, “Look at me… look at me.” Nobody wants to be like that. I just wanted to do my own thing.

There are a few guys that look extrememly comfortable up there when they put on a visual show. It looks completely real. One of the greatest at it is Shannon Larkin. There are people that try to lump us together and say, “Who did it first?” But, we don’t play the same at all. I saw him play one day after I had been playing and said, “Wow, that guy has great personality.” People see guys that play extrememly hard and fast and express themselves like that, and they think these guys are ripping each other off, but it doesn’t work like that. It’s our personalities.

O.L.D.  Which song from Black Out The Sun is your favorite to perform live?

O.L.D.  Any good stories to share from the studio while recording Black Out The Sun?

Morgan: It was painless. It was really painless. It was so fast that I had to go back and listen to everything because I really did wing it. I’d listen to the track, and I’d be like, “Wow, I’ve played that song once, and we’ve played it as a band once.”  It was crazy how fast it went.  I like it that way.

The weirdest thing is I don’t like to be in a studio playing drums for any longer than I have to. I love being in the studio. I love working on vocals and putting together guitar parts and layering and all that stuff. Drum parts are the stuff that I dislike the most.

O.L.D.  Do you think writing it on the spot gave your album a less produced or programmed sound … more of  “real” sound.

Morgan: Clint and I do a lot of producing, so we know what basic formulas are: verse, bridge, chorus, verse, etc. We have these formulas that we’ve done so many times. Subconsciously, some of those things were coming into play, but we were trying to pull away from the formulas. We weren’t focusing it on radio. We weren’t focusing on trying to write a commercial hit. We’re a melodic band, so they’ll be on radio and stuff like that, but there were definitely moments where we said, “I don’t care if anyone ever plays this on the radio.” We loved it.

O.L.D.  Any advice for someone that’s looking to do what you do?

Morgan: I don’t give a lot of advice, but the one thing I always say as far as the band situation … it doesn’t matter how good the guy is. You have to like the person as a human being. I just love hanging out with my bandmates — watching football, going out to eat. It wasn’t like we had the best players, but we enjoyed being around each other.

If you get lucky enough to get a deal, and you end up on the road for the next 15 years, you better like the guys you’re with. You’ll be living in a tube with a hallway together. It’s something people overlook. There are people with the best bands, and people are like, “My singer’s a ****.” Well, I can promise you that you won’t be together in 15 years. There’s just so many bands that have made it, and there are ego problems or personality problems, and it just implodes.

Be sure to check out Morgan’s Alien Freak Wear

Follow the Sevendust studio vlog recording Black Out the Sun

An eye-opening look into the business of sessions drumming. Learn how to grow your career as a session drummer... read more

From making connections, mastering your art, and playing for the music, Todd Sucherman, throne-man behind STYX, lays out invaluable keys... read more

Martin Osborne gets the lowdown from one of the UK's finest session drummers, drum tutors and all-round decent bloke,... read more

Exclusive Interview With BLESSED BY A BURDEN’s Chris Alyx

O.L.D. introduces Blessed By A Burden’s Chris Alyx to talk about life as a drummer. read more

OLD: What got you into drumming, and when did you first realize that this is what you wanted to do... read more

Little did he know that joining OnlineDrummer.com would eventually lead him on a self-made quest for more and more unique... read more

An exclusive OnlineDrummer.com interview with the rhythm behind STYX, Todd Sucherman. Get an inside look into the life and... read more

The following three warm-ups were written for a student who requested some additional work with eighth-note triplets and sextuplets. To... read more

Greg Parrow of the rocking group "Transmit Now" shares his knowledge and experiences in the biz. Learn from Greg, a... read more

Andy Ziker provides a drumscore and self-analyzes a recorded performance of Mercy, Mercy, Mercy by Jivie and the Tribe. read more