This is a quick reference for the basic elements and terminology used in rhythm notation.

Tempo mark: indicates the speed of the beat, usually expressed in beats per minute (BPM).

Time signature: the stacked numbers dictate the meter of the music. The top number indicates how many beats per measure. The bottom number, the note value of the beat.

Bar line: signifies the end point of a measure/bar. Bar lines work in conjunction with the time signature to create the rhythmic framework of the measure, section or whole piece. Bar lines divide each line into sensibly sized units of rhythm called measures or bars.

Down beat: the first beat of a measure, named after a conductor’s down-swing.

Back beat: the weaker beat(s) in a measure. In popular music, the snare drum is often played strongly on beats 2 and 4. This is commonly referred to as the ‘back beat’.

Up beat: the last beat of a bar, named after a conductor’s up-swing.

Off-beat eighths: eighth notes that fall between the primary beats. Counted as ‘and’ or ‘an’; abbreviated as ‘+’ or ‘&’.

Off-beat sixteenths: sixteenth notes that fall between the eighth notes. Counted as ‘e’ and ‘a’. 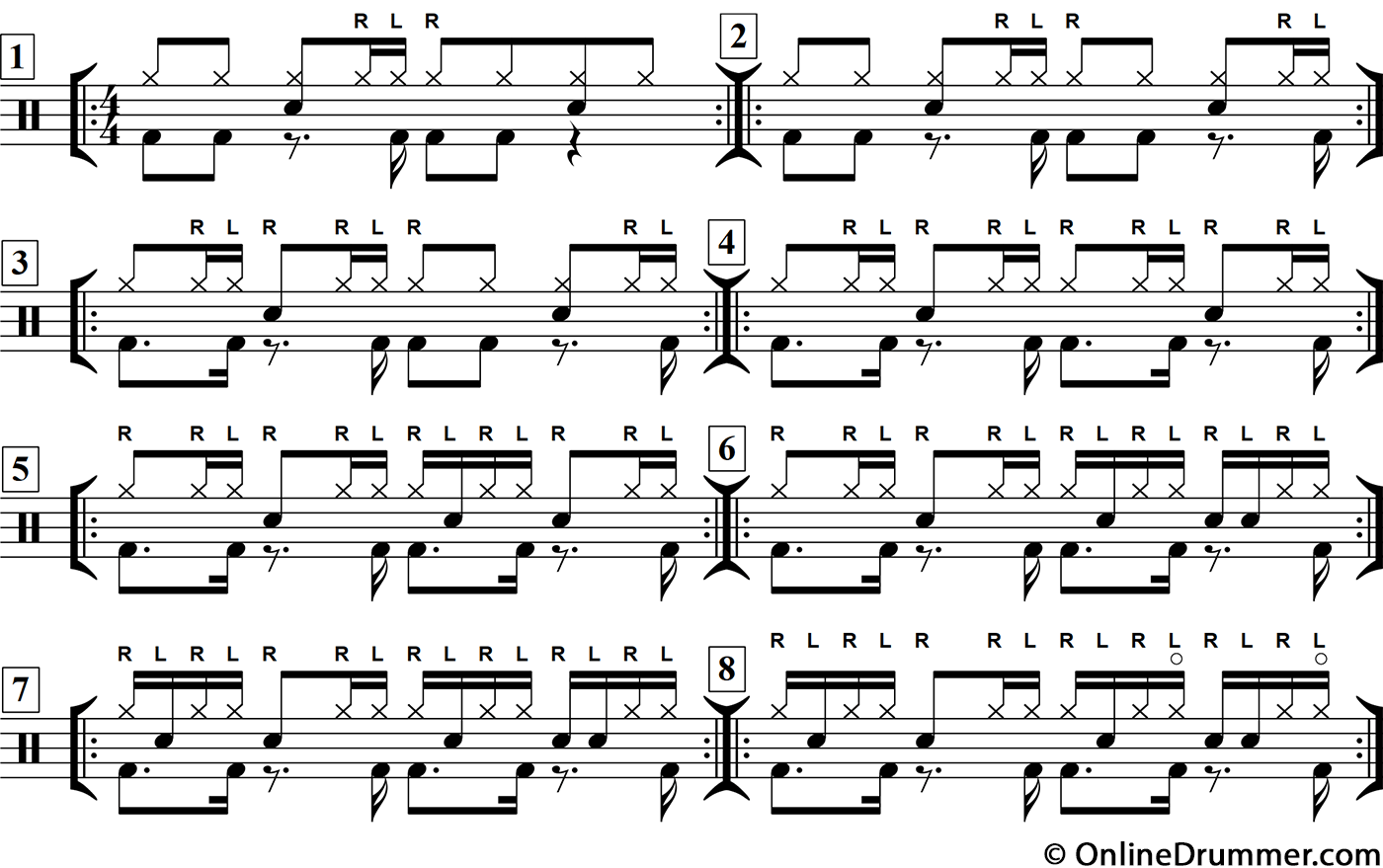 Stickin’ with the Bass – Drum Beats

Enjoy 8 grooves that feature an additional hi-hat stroke each time the bass drum is played on an "e"... read more

This distinctive four-measure rhythm was played with minor variations in the verse sections of the song. In the fourth... read more

Piano Man, Billy Joel's signature song, was the singer's first single and his most popular song of all time.... read more

This is the famous (and often bewildering) intro to the song Rock and Roll by Led Zeppelin. read more

"We Are" is the lead single from progressive rock band Karnivool's third album, Asymmetry (2013). read more

This groove features a slick ostinato 3 pattern on the ride cymbal that is no walk in the park.... read more

This rock flavored beat is phrased in 3/4 time. The open hi-hats add an up-beat, syncopated layer to the... read more

Teardrop is the UK based trip-hoppers most famous song to date. It featured as the second single from their... read more

The rests in this funky groove give it a hesitated feel. The second bar gives the impression of odd... read more