Pyramid Song was the first single from Radiohead's 2001 album, Amnesiac. Its hypnotic rhythm has been the subject of much debate over the years. The notation and audio clip above were taken from the point where the drums enter (at 2:10).

Drummer, Phil Selway plays the grace notes as single-stroke fours, leading with his left hand (LRL) and finishing with his right on the ride cymbal.

From the beginning of the song, the pianist plays an 8 measure chord progression using the rhythm below. The swung-eighth notes are grouped: 3+3+4+3+3.

The same rhythm is translated below into the more familiar ‘common time’. In this version, rests have been used instead of ties for greater clarity. The pattern will be familiar to anyone who has played a bossanova. The ‘bossa nova clave’ (time key) is the same as the ‘son clave’, except that the last note is delayed by half a beat.

While the rhythm itself is not difficult, the harmonic rhythm (the timing of chord changes) can be disorienting, as some of the chords resolve in unexpected places. Listen out for the resolution at the beginning of the 8 measure cycle and remember that counting is your friend!

Here is a visual depiction of how the song’s core-rhythm relates its title, Pyramid Song.

Regarding the inspiration for the song, Thom Yorke stated in an interview with MTV “Stephen Hawking talks about the theory that time is another force. It’s [a] fourth dimension and [he talks about] the idea that time is completely cyclical, it’s always doing this [spins finger]. It’s a factor, like gravity. It’s something that I found in Buddhism as well. That’s what Pyramid Song’ is about, the fact that everything is going in circles”.

Enjoy this bossa nova with a 3-2 son clave on the snare, playing against a shortened clave variation on... read more

I Miss You – Adele

This hypnotic tom-based groove underpins Adele's new song 'I Miss You'. The end of the 8th measure cycle is... read more

I Write Sins Not Tragedies contains several interesting grooves. This excerpt is taken from the second verse, around the... read more

The soundtrack for the movie franchise 'The Terminator' has seen several incarnations over the last 30 years. In this... read more 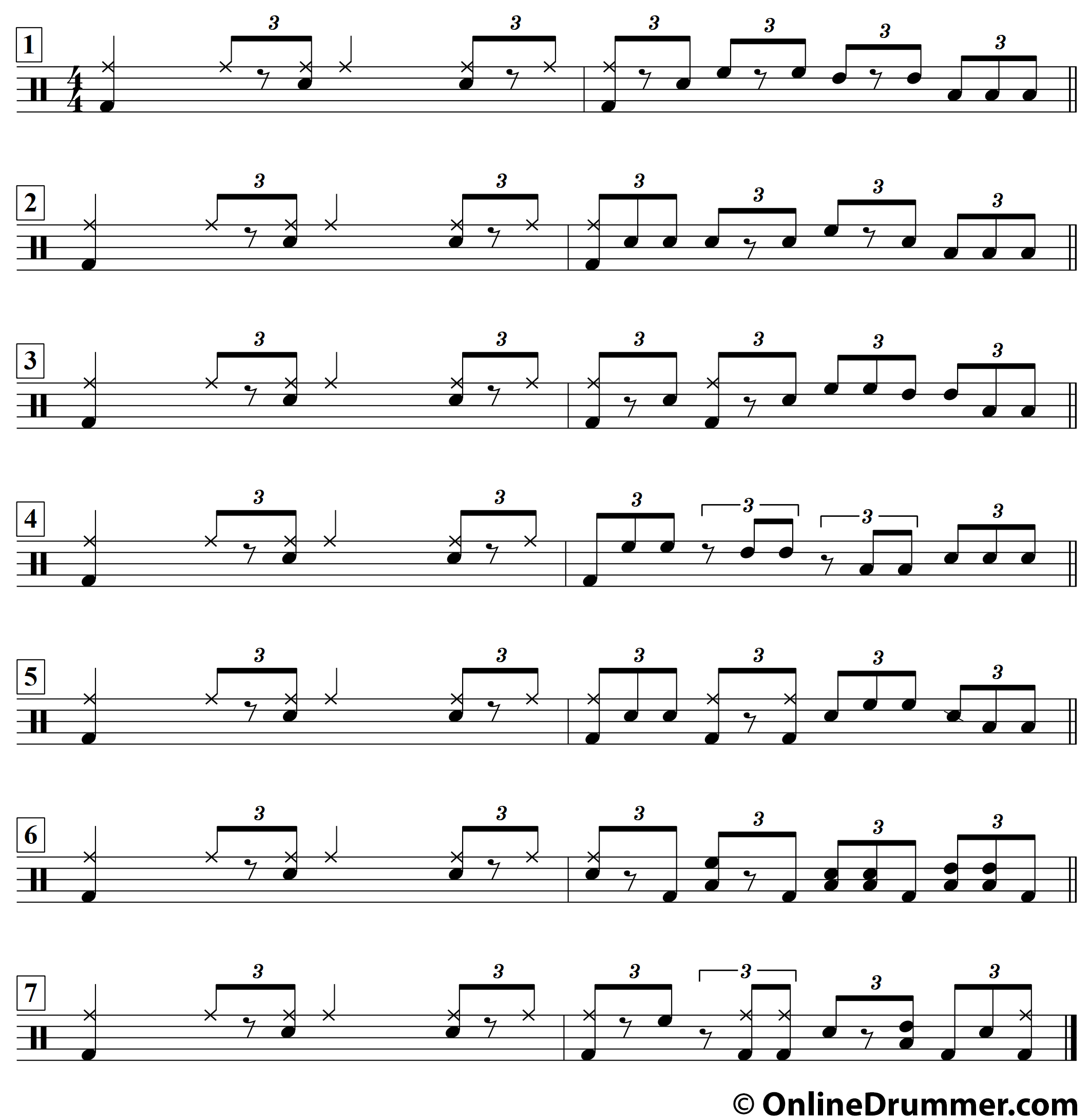 A Sheetful of Swing Fills

Enjoy a handful of 7 drum fills that can be used along with any swing situation. read more

'Roxanne' was originally released in the UK in 1978 without making waves. However, it was re-released early the following... read more