Every Breath You Take – The Police – Drum Sheet Music

View cart “Message in a Bottle – The Police – Drum Sheet Music” has been added to your cart. 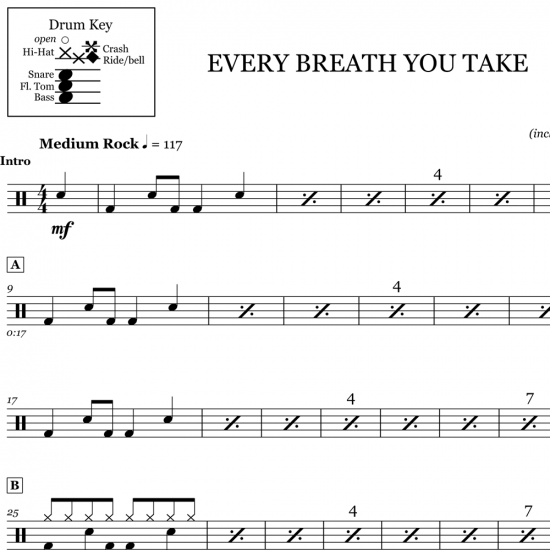 Every Breath You Take – The Police – Drum Sheet Music

The full drum sheet music for “Every Breath You Take” by The Police from the album Synchronicity (1983).

“Every Breath You Take” was one of the simplest and most commercially successful songs recorded by The Police. Despite the apparent simplicity of the drum part, it was actually pieced together using multiple overdubs. Stewart Copeland described the recording process in this article, from which the quote below was taken:

“The drum part is very simple: The kick drum is from a drum box — an Oberheim — and I overdubbed the snare drum, which is actually a snare drum and a Tama gong drum played together, one in one hand, one in the other so you get a really heavy, but cracking backbeat. Then the hi-hat was overdubbed as a separate track. For the swooshes into the choruses, I overdubbed the gong drum with a cymbal swell played with soft mallets. The drum part was completely assembled with overdubs.”

As it was not practical to notate every nuance heard in the final cut, the sheet music has been written simply — without the hi-hat dynamics, which were overdubbed.

Listen to “Every Breath You Take”