First off, thanks for agreeing to be interviewed on behalf of the members and frequent visitors from around the world to onlinedrummer.com.

Well, thanks for the interest…just caught me in a good time and i’m able to do this tonight right away.

Jojo, I suppose the first question should be asked about how you started drumming.  What made you pick up a stick?

My dad is a musician and i grew up in an artistic environment. I was always surrounded by music, and at some point the vibe started to rub off on me and I started to bang along on stuff to music from the radio, record player, or life music. At some point, I guess, someone gave me some drumsticks….eventually, my parents gave me a snare drum and some hi-hats…they were very supportive of my quests in music. I guess I was around 1 1/2 when I first started out (I’m told).

It’s been documented that you credit Buddy Rich as one of your main influences.  Who else inspires you?

You are very heavily connected with drum & bass and jungle music in New York, and you have created “nerve” which, in layman’s terms, is mixing dj music with jazz and improvising on it.  The credit list of musicians that have worked with you on this is very impressive.  What brought you to initiate that unique concept?  And how does it work in a live performance?

I used to be heavily connected with d’n’b etc. In nyc in the mid 90’s. Not so much anymore as the tidal wave of those styles has ebbed out quite a bit since the mid 90’s. Now, I’m adjusting my radar into any direction that indicates steps towards an interesting and fresh musical experience. Some is still within the electronic scene, such as the dub step stuff for instance. Other influences come out of the new stream of experimental rock and stuff…whatever it might be…old or brand new.

Innitially i decided to go into this direction because it was the logical progression of my development as an artist. Without a doubt, the most interesting occurences in popular music culture during the 90’s were electronic music and alternative rock. So following the spirit of my heroes like armstrong , coltrane , hendrix, or miles, I took on the music of “today” in order to create leeway into an adventurous future.
In a live performance, basically you can explore and pry open the space between “0” and “1” which is the  basic entity in electronic music, or digital culture in general. We’re talking about improvisation, intuition, communication in realtime here, basically many of the things that the resolution capabilities of computer interactivity has not yet matched. To use the texural and aesthetic surface of electronic music makes an interesting and fun study that people can emotionally and conceptually understand relatively easy. Hence, the success of nerve…I guess.

You’re also a keen magician and have managed to incorporate your drumming into a magic show with your good friend Marco Tempest.  How did that collaboration start? And how are the shows doing?

We did this like over 15 years ago… just experimenting.  I just orchestrated his movements with music and drumming. Relatively simple. So I also composed the music for some of his shows in the past. We have not been doing any shows like this in many, many years and there are no plans right now to do any as both our careers developed into differenbt directions.  But marco was actually the co producer of my dvd “secret weapons”.  Many of the visual concepts came from him.

You’ve done clinics and workshops/masterclasses all over the world, how do you manage to keep them fresh without you running out of steam, so to speak?  What would a first time audience expect to see at a JoJo Mayer clinic?

The first thing is not to do too many clinics. Don’t become a “clinician”. Clinics can be fun and I like the platform to interact with fellow drummers. But the format of a clinic is usually geared towards demonstration more than the event of creating a musical event. Unfortunately much of the clinic audience expects this. They come because they expect to be blown away. This can be tiring after a while. I would only do clinics as long as I can maintain musical content..for their sake but also for my own. If I can’t do this anymore I’ll stop. There’s a bunch of guys that do clinics almost exclusively…and eventually you can hear it in their playing…..so I’m aiming to provide an educational as well as a musical experience to the people coming to my clinics.

I can’t possibly continue without asking you about your drumming control and coordination, the one handed single roll, which you’ve been credited as one of the fastest in the world, you use the open-close technique as well as the moeller.  Your technically flawless proficiency at your art is astonishing; do you practice every waking minute?

I used to practice whenI was younger.  Today, I hardly ever practice..  Not that I couldn’t use some practicing, but for the simple reason that my schedule doesn’t allow too much time to practice anymore. I actually have to cancel work in order to take time off so I can practice. Sometimes, when I’m producing, I stay away from drumsticks for a couple of weeks.. Then I usually need a few days to get into shape again.

How do you tend to keep in shape with such a gruelling schedule?

It’s hard some times. I’m still learning how to do it better. I guess the most important thing is to retain a healthy lifestyle all over. Enough sleep and good food are essential, but having fun is also very important. When you love what you’re doing you can go the extra distance way more easily than if you don’t.

With sabian, you have created the JoJo Mayer signature “fierce ride”.  What kind of input goes into getting the cymbal sound you desire?

The sound comes first. You have to be able to visualize the sound as clearly as possible. Then it’s just a matter of finding the right syntax in communicating with the people who actually make the cymbals I’m looking for. Mark Love at sabian is a real pleasure to work with. He literally pulled the sounds for the fierce ride, the fierce crash, the fierce hats and some other prototypes out of my head.

I’ve noticed that in the past you’ve taped an 8” rocktagon splash to your snare drum, what kind of sound did that generate?  Do you always experiment with new sounds?  Do they often work?

I did this in order to create some sort of “white noise” electronic sensibility. In the meantime I can get better results with things like the sabian “choppers”. I experiment a lot. All the time.. Sometimes it works, sometimes it doesn’t..you got to try…..and try…and try.

You have two different kits, one for your basic setup and one for “nerve”.  Wouldn’t it be easier to play one amalgamated kit?

I don’t really use the “basic” set up anymore.  In the meantime my “nerve” set up has actually sort of amalgamated into my standard set more or less. I sometimes have to switch to different sizes of drums and cymbals. Recently I used a 24” bass drum and big toms for a rock thing. Then its back to maybe a 18” bass drum, or a 20” which now is my standard bass drum size.
In general the music dictates the setup and sound of my kit.

What new recordings would we be expecting to hear you on soon JoJo?  What does the future hold for one of the world’s most in demand drummers?

I’ll release a record with nerve called prohibited beats soon. There’s a bunch of other projects in the making, but it’s just a little too early to let the cat out of the bag…I’m having fun to find ways to surprise myself and the audiences.
The future? I’m not a psychic…but I hope that the future will have a place for me. I’m making a lot of investments towards expressing what is futureproof. I’m investing in honesty and authenticity. I think people will be able to use this in the future too.

No albums really…at the moment it feels like albums are a thing of the past. Got a few random tracks floating around. Some podcast dub step stuff, some beatles, in time by sly, some squarepusher and schneider tm, ”moppin and boppin” by fats waller….some aretha franklyn, jb….the battles…

2.      What is your proudest achievement in music?

To earn a living doing something I love and that I can believe in, while inspiring the lives of others at the same time.

If the occasion arises I hang with my buddies here in NYC.  Karaoke with keith…or club hopping with negro…card magic with joey baron….late night snack with deantoni parks, cigars and single malt with steve smith and robby ameen… No regular routine though.

5.      If you’re stuck in a lift for one hour with the person of your choice, alive or dead, who would that person be?

….if she’s in a “good mood”….. Marylin monroe, perhaps?…I think it would be most fun to waste an “important” hour with her. Or mozart maybe…it’ll be interesting to hear what he would do after i get a chance to introduce him to post african rhythms. Jesus, mohammed, budda or moses might be interesting….

6.      You’re pretty much an artist who has the deepest respect for your fans, and they are truly dedicated to you, too.  Have you ever had a fan that’s freaked you out by asking you to sign something “different?”  If so, where did you sign?

Some fans in Asia requested I sign the lcd display of their phones with a permanent marker…I thought that was sort of far out..

10.  What would you best like to be remembered for?

A person that was good to have around and perhaps a cultural contribution I made.

Jojo, many thanks for taking the time to answer these questions.  Have you any final words of wisdom to say to the OnlineDrummer community?

Look for good questions, not only the answers…..go to the bottom of things….don’t lose sight of the big picture…understand what your talent is and what you’re about to do with it…learn the language of music and drumming and use it to communicate. Last but not least, mind your attitude…at the end of the day, it might be the most important thing.

Jojo also has an excellent DVD out at the moment.

Frank Ferrer, one of the most inspiring drummers I’ve had the pleasure of meeting, shares his career-changing, mind-changing message... read more

Giving his opinions on rudiments, tuning, the challenges and rewards of being unique, Petter Diamant encourages all drummers to... read more

OnlineDrummer.com takes a look at the work of Jeff Davenport ahead of his upcoming clinic on July 3rd,... read more

Colin Cunnigham, the rhythm behind new alternative group "Oh No Fiasco," shares his talents and experiences. Look for their... read more 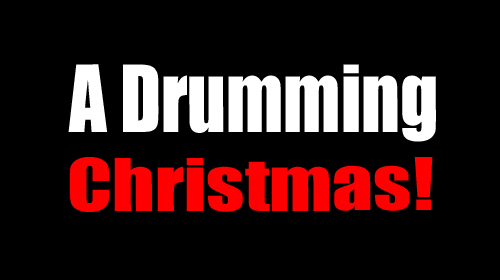 Each year, members from our online drumming community collaborate to create a special Christmas video wishing you a merry... read more

Thomas Lang shows off his stick tricks and groove in his classic Lang style. read more

Have you ever carefully learned a song for a gig, and then experienced an on-stage train wreck? Your band... read more