The Basic Drum Key (above) is a quick-reference for the most commonly used notations.

Our Master Drum Key (below) includes both basic and advanced notations. We've included detailed explanations and videos below the key. Feel free to print the Master Drum Key for your reference. 
You'll find detailed explanations, graphics and videos below. Read this section straight-through or skip ahead to the notations you need further support with.

Bass 1 is the standard bass drum played with the primary bass drum pedal.

Bass 2 is played either on a secondary bass drum or on the same bass drum with the slave pedal of a double bass drum pedal (see below).

Our drum key includes 7 toms arranged from lowest pitched to highest. It's unlikely that you will encounter many songs that require 7 toms. However, because some do require 7 toms, we've identified the notation on this master drum key.

Arranged from lowest pitched to highest pitched, the toms are as follows:

A traditional drum set arrangement has 3 toms. This is the most common arrangement you're likely to encounter in drum sheet music. In the master drum key, they are identified as floor tom 1, tom 2 and tom 1 (see below). 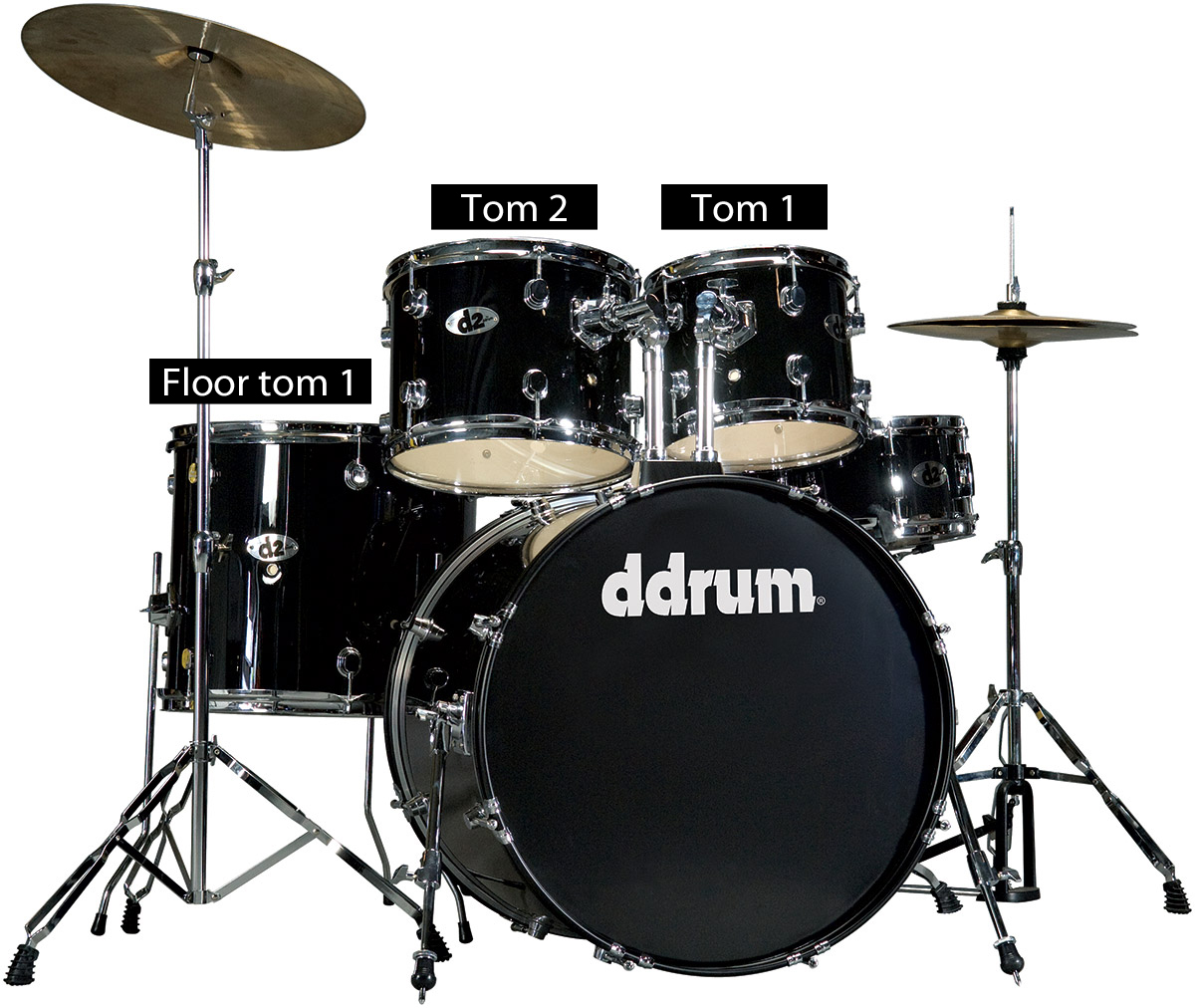 Another common tom arrangement is called, "Two Up, Two Down." This arrangement features two toms mounted above the bass drum (i.e. "up") and two floor toms resting on the ground (i.e. "down"). In the master drum key, they are identified as tom 1, tom 2, floor tom 1 and floor tom 2 (see below). 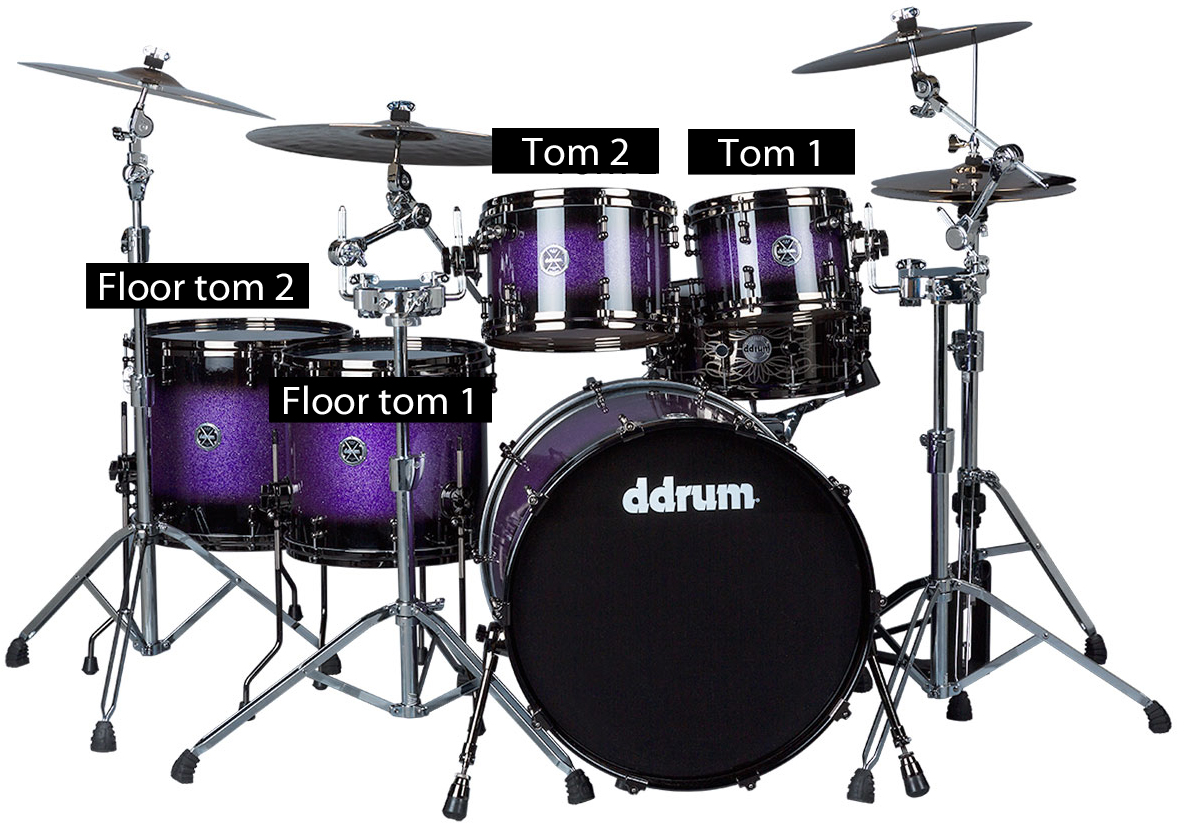 A similar tom arrangement to the "Two-Up, Two-Down" is the "One-Up, Two-Down" arrangement. As the name implies, one tom is mounted above the bass drum (i.e. "up"), and two floor toms are resting on the ground (i.e. "down"). The toms for this arrangement are identified in the graphic below.

IMPORTANT: If your drums are setup in this arrangement, it's common (and often necessary) to play floor tom 1 as your tom 2 and floor tom 2 as your floor tom 1 when reading drum sheet music. 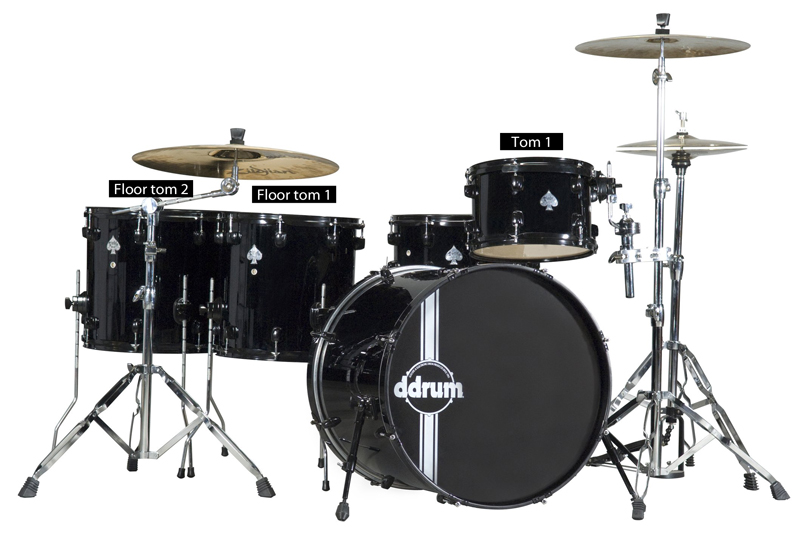 The two highest pitched toms in our Master Drum Key are called "additional toms" because they are additions to the most common tom arrangements. Additional toms aren't often used in mainstream music, but you will come across these from time to time. If you don't have seven toms, you will have to substitute your tom 1 (or another tom) for the additional toms in the sheet music.

Note on floor toms: Floor toms rest on the floor on three legs. In some setups, the lowest tom(s) are attached to a cymbal stand with a clamp rather than resting on the floor. It's fine to use an "attached" low tom(s) in place of a traditional floor tom(s).

Drum Modifiers change the way you strike a drum or cymbal. Our Master Drum Key shows these modifiers in the snare drum space, but they can apply to any drum or cymbal. For example, you may find a ghost on a tom stroke, hi-hat stroke, bass drum stroke, etc.

A very quiet stroke. You can think of a ghost stroke as a light tap (or drop) against the head. Generally, ghost strokes are played with the stroke starting at about 2 inches above the drum head.

An accented stroke is to be played louder than other strokes. In other words, it should stand out.

A marcato is a type of accent, but the marcato stands out even more than a normal accent. You can think of a marcato as a 'strong accent.'

In a right-handed flam, the left stick plays a quiet grace stroke slightly before the right stick plays the main, primary stroke. Traditionally, a flam should be played with one motion (i.e. both hands move at the same time). The stick you're playing the grace stroke with should start about 2 inches above the drum head while the primary stroke starts in normal position.

A drag is sometimes referred to as a ruff. You can use the terms interchangeably. The drag is very similar to a flam but the drag has 2 grace strokes instead of 1. The grace strokes can be achieved by bouncing the stick, or for a more orchestral sound you can play the grace strokes as a buzz against the drum head. 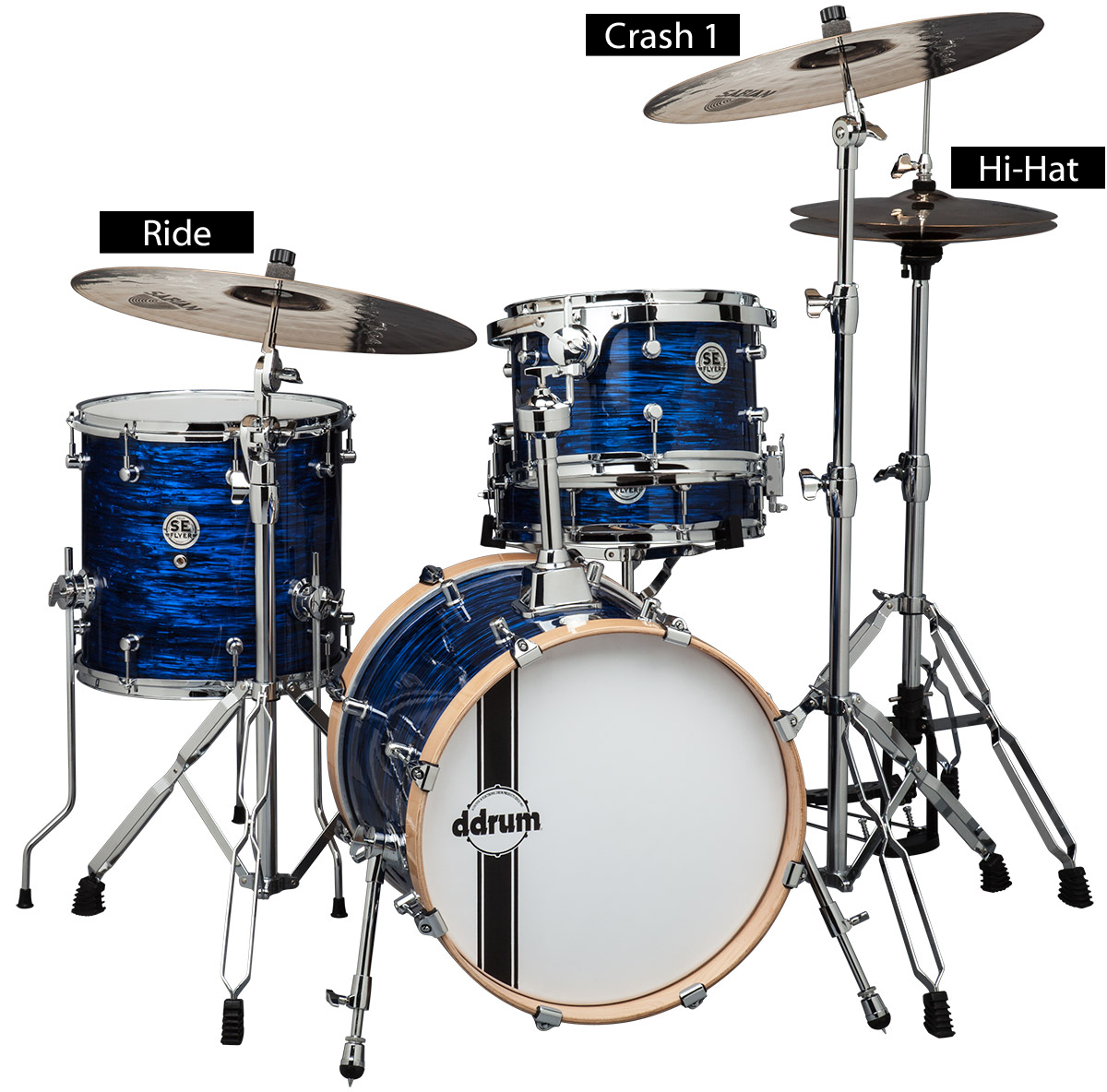 If you play with this cymbal setup, you'll need to play any crash 2 in the sheet music with your crash 1. Also, any auxiliary cymbals, such as Chinas or splashes will need to be played on the crash.

Here's another common cymbal setup that features 2 crash cymbals. As with the previous, starter setup, if there are any auxiliary cymbals (i.e. Chinas or splashes) in the sheet music, you'll have to substitute by playing either your crash 1 or crash 2 for those strokes. 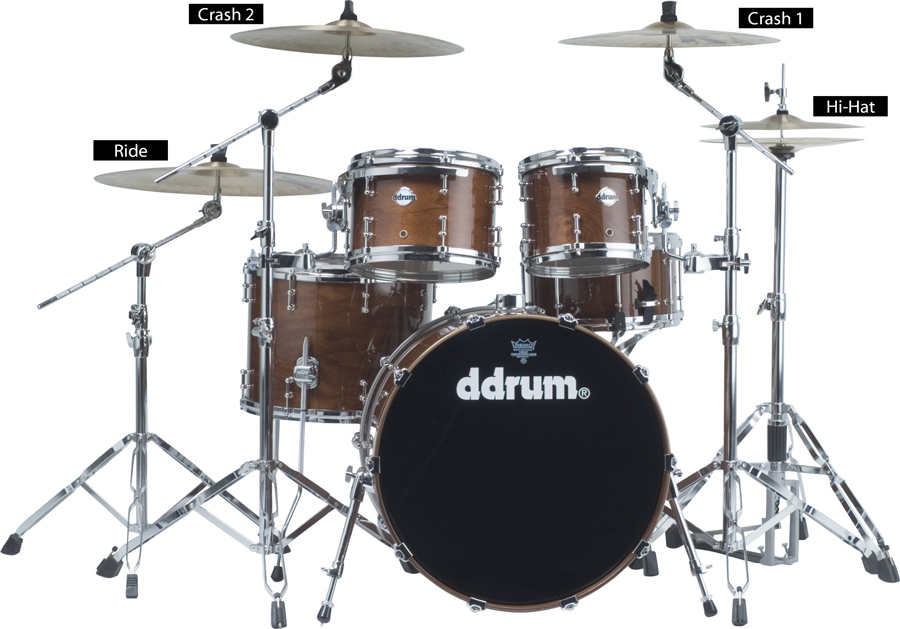 Splash cymbals and China cymbals are great additions to any cymbal setup. They're not used as often as the cymbals identified above, but they do make their way into mainstream music and other classics throughout past decades.

A splash cymbal is a smaller cymbal that makes a sound similar to a metallic "splash." Listen to the 10 inch splash cymbal being played in this video:

A China cymbal has a unique, almost "trashy" sound and is to be mounted upside-down. Here's a video of an 18 inch China being played:

Note on crash cymbals in sheet music: Since every drummer has their own unique cymbal choices and placements, you'll sometimes have to get creative when interpreting drum sheet music. Often, it doesn't really make much of a difference which crash cymbal you hit. Get creative.

At times, special instructions need to be given to the reader regarding how to hit a cymbal. Cymbals are very dynamic and produce distinct sounds depending on how they are hit. Below are cymbal modifiers that we use to communicate how to hit the cymbals. 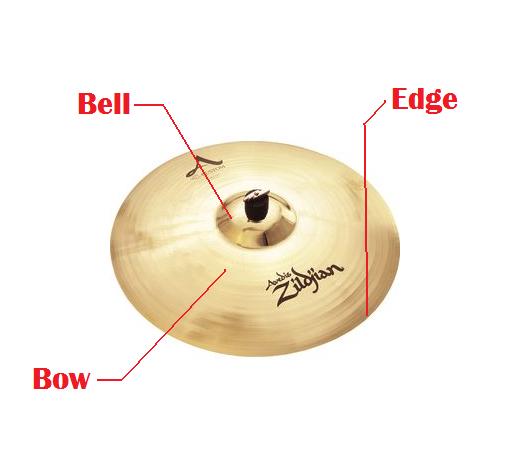 This indicates that the ride should be hit with the shoulder of the stick on the edge of the cymbal. In other words, hit it the same way you would hit a crash cymbal to make it "crash."

Hit the crash cymbal on the bow with the tip of the stick. A Crash w/tip should sound (and feel) similar to playing a normal ride cymbal stroke. It shouldn't "crash."

Hit the crash cymbal as usual (i.e. with the shoulder of the stick on the edge of the cymbal), producing a crash. Then, choke the cymbal by grabbing it with your other hand, cutting off the sound. For an advanced choke, you can both hit the crash and catch it with the same hand.

Cymbals are meant to let ring out unless some other type of instruction has been given. For example, a cymbal choke or hi-hat close. However, sometimes including the "let ring" symbol (i.e. an unconnected tie) makes it clearer to the reader and reinforces that the cymbal is to let ring. It is especially helpful if there are rests after the crash cymbal. Telling the reader to let the cymbals ring out throughout those rests gives the reader extra confidence.

The hi-hat splash is achieved by hitting the hi-hat cymbals together with the foot, and then quickly releasing them apart to let them ring out. It's similar to an orchestral crash cymbal.

The slashed circle above a hi-hat stroke means to play the hi-hat "loose." In other words, instead of pressing the hi-hat pedals together tightly, lift up on the pedal a little to allow the cymbals to reverberate when hit. This gives a "loose" sound.

The open hi-hat is indicated by a circle above the note head. This means that the two cymbals should be "open" (or not touching) when the hi-hat is hit.

Strike the hi-hat in "open" position (i.e. the top and bottom cymbal are not touching). Then, quickly close the hi-hat. This creates a fast attack with the open hi-hat, but then chokes the sound quickly by pressing the hi-hat cymbals together.

When a modifier is to be applied to many (or all) of the cymbal strokes in a section, we use a "section modifier" to communicate that the entire section should be played a certain way. This keeps our sheet music clean and clear.

An open roll is played with clear double strokes (i.e. diddles). In the graphic above, the "Open roll (written out)" shows all of the strokes of the roll written out in 32nd-note notation.

A closed roll is played by buzzing the sticks rather than playing clean double strokes (i.e. diddles.) This roll is either referred to as a buzz roll, closed roll or sometimes an "orchestral" roll. In our sheet music, we use the Z symbol on the note stem to clearly indicate when you should use buzz strokes over diddles. In the graphic above, the "Buzz roll/Closed roll (written out)" shows all of the strokes written out in 16th-note notation (with buzzes).

This stroke is played by pressing the tip of the stick against the head creating a "buzz" sound. See the video example above for "Buzz roll/Closed roll" for an example of how to play a "buzz" stroke.

A crushed buzz roll is achieved by "buzzing" both sticks on the drum head at the same time. Preferably, try to let the sticks "buzz" for the duration of the note. In the graphic above, the "crush" symbol is over a quarter note. So, you'd let those sticks buzz for one entire beat.

Slowing Down / Speeding Up

Sometimes, a roll gradually speeds up. The 'feathered beams' indicate whether the selection should speed up or slow down.

A crescendo roll starts quietly and gradually gets louder until the end of the roll. The crescendo will have to be quick on shorter-duration rolls. Be sure to play the crescendo consistently, avoiding getting too loud to quickly (or vice versa).

This master drum key isn't exhaustive, meaning that we didn't include every possible notation that you might encounter. We've included the most commonly used notations and symbols. All of our premium sheet music includes a song-specific drum key on the top of the first page for each song. If we've used any special notations or symbols, they will be identified in the song-specific key.