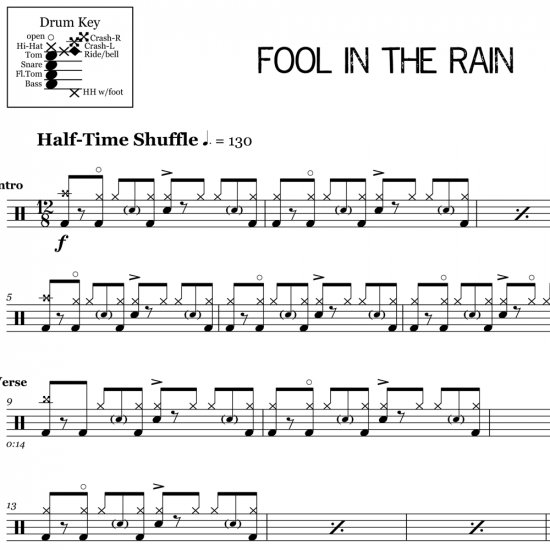 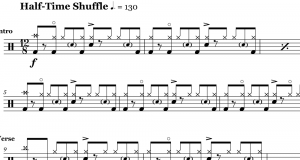 The full drum sheet music for “Fool in the Rain” by Led Zeppelin from the album In Through The Out Door (1979).

Drum Sheet Music for “Fool in the Rain” by Led Zeppelin

Bonham’s iconic half-time shuffle in Fool in the Rain has remained a ‘bucket list’ staple for drummers since its release in 1979. Borrowing from Bernard Purdie’s famous “Purdie Shuffle,” Bonham brought a hard-hitting, rock approach to the groove. Jeff Porcaro further sealed this grooves legacy with his own version of the shuffle in Rosanna by Toto.

Fool in the Rain has an abrupt change in feel during the bridge. Leaving the half-time shuffle and transitioning to a 4/4, samba-style feel, Bonham cuts loose on the snare with sixteenth notes and 3 levels of dynamics. We’ve notated these dynamics so that you can accurately reproduce Bonham’s sound. It’s important to note that there are a significant amount of percussion overdubs during the bridge. We’ve notated Bonham’s drum set contributions to the bridge.

Listen To “Fool In The Rain”