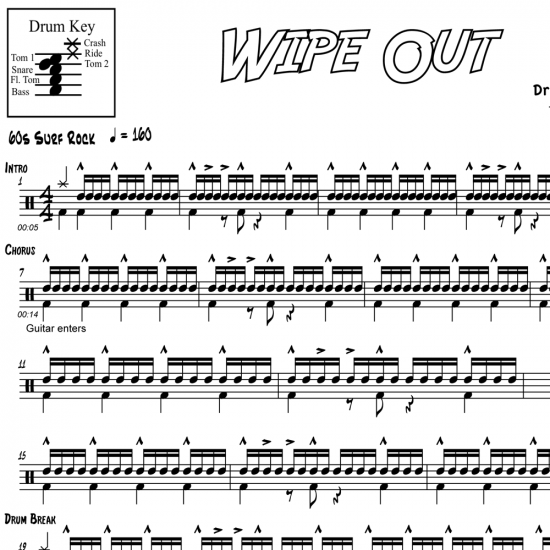 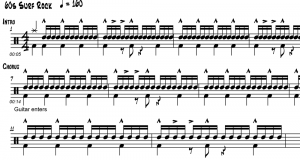 The full drum sheet music for “Wipe Out” by The Surfaris from the album Wipe Out (1963).

If you’ve ever told anybody that you’re a drummer, then you’ve most likely been asked more than once, “Can you play Wipe Out?” Ron Wilson’s drum track, which was reportedly a sped up version of his high school marching band’s drum cadence, played an integral part to the song’s success and longevity.

In the prime of the ’60s So Cal surf music craze, Wilson experimented with this energetic, drum-centric beat full of sixteenth notes and accents. It was so unique to the surf scene that the song could be immediately identified simply by tapping out the drum beat on a dinner table or desk. Every drummer wanted (and perhaps needed) to learn Wipe Out to earn their “surf cred.”

Perhaps because of this, there have been many covers and versions of the song. Though the drum beats vary slightly, the main feel of the song’s famous drum part holds true. Even so, we’ve transcribed, note-for-note, the original drum part that set the wheel spinning in 1963.

NOTE: In order to produce the correct feel, multiple levels of accents must be used. A marcato is used in our sheet music to account for this. A marcato looks like this ^ and is to be played louder than a normal accent.

Listen To “Wipe Out”